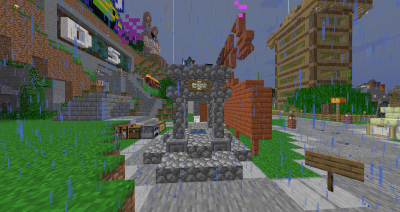 Bup Sewers is a project initially planned and coordinated by Nesamons, and expanded into a general community project for a new place to create builds and get around Spawn.

Bup Sewers is a community project to create a 'Sewer System' underneath 0,0 and the world spawn area.

It contains many shops and has connections to the majority of water features in and around Spawn and 0,0

Shops and locations in the sewers include:

'The Oubliette Lounge and Cafe' - Built by bl1ngbl0ng

'The Endless Expanse Smoke Shack and Shop' - Run by FoxyProxy

After its creation, StarsDown64 took lead of the project, and expanded the sewers to connect to Lake Touracour as well as Vic's Pool