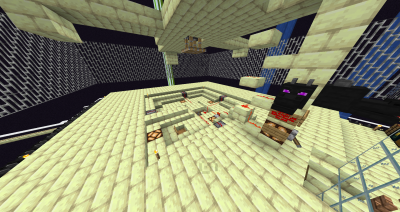 Created by Arceveti in 2020, Gay Dragon Jail (when activated) will trap the dragon in the same position until killed by the player. This contraption is not destroyed upon the dragon spawning because the server has disabled mob griefing.

Connected to GDJ is an automatic End Crystal destroyer that uses arrows and TNT to blow up crystals once the dragon has spawned to speed up kills.

Before an on/off switch was implemented (alongside some changes to how the contraption load), Gay Dragon Jail would cause incredible lag to the server whenever someone would enter the end dimension, often crashing the server. The initial fix for this issue was placing IngoBot inside the end dimension to constantly load GDJ to avoid issues when players would enter the end.

If the dragon is spawned before activating Gay Dragon Jail and is later activated, the dragon will not land on the End Fountain, but instead, slowly rise until just below the GDJ platform where it will stay there until killed or GDJ is turned off.