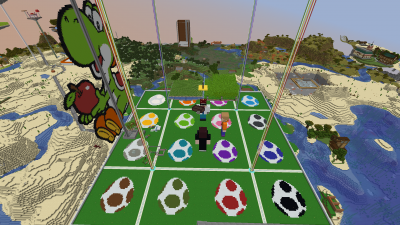 Three statues at IngoH's base built in appreciation of the people they depict. These statues were the first player model-based statues on the server. Two similar statues were later built on the server, both of SimpleFlips. One by Markoroni (at 330x 290z), built from coal blocks and wood, the other being a stone statue by dothedes, located at (460x 390z). The statues at IngoH's base surround his storage center. The bottom floor of this storage contains all kinds of valuable items, most notably the "Server-Breaker Break-In", a Knockback II stick rewarded by Victuracor after not crashing the server after stealing the actual "Server-Breaker" (also known as the crashma stick), a Knockback 20000 stick capable of crashing the server, which already happened twice. Another highlight of the collection is the four SimpleFlips death chests and the only IngoH death chest in existence.