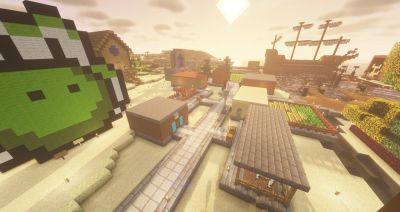 Ikaport is a town started by DeltaJordan that has been popularized over the time that the SimpleFlips Minecraft server has been online. The name "Ikaport" is derived from the Japanese word イカ Ika, meaning squid, and was named as such due to the founder's obsession love for Splatoon. Being one of the earliest towns on the server, it has a large amount of lore and history to it.

DeltaJordan originally planned on starting Ikaport much further from Spawn (if you are able to find it, you can see the remnants of a pirate ship and a farm). After feeling a bit isolated due to the distance, he then moved to the current location and completed one of the first buildings in Ikaport, his house, on October 4th, 2019. He then expanded the town with villagers (including a mending librarian, which died or something probably), a farm (which was downsized to 2 skeletal horses due to server load issues), and created the inkling pixel art. Over the next few days, multiple people would arrive and build structures there, including MarshieMallow34, Ven0mous, KitLemonfoot, and even Jet Eriksen.

On October 11th 2019, one of the members of the town, namely MarshieMallow34, was accused by Victuracor of taking a stack of clay balls from him, which Marshie admitted to. Two days later on October 13 2019, it was discovered that Marshie had stolen large amounts of items from SpK, which resulted in them getting banned from the server. After this happened, Ven0mous moved to the then-new Sexton to begin building there, while KitLemonfoot stayed in Ikaport as it was where his base was. Around the same time, two other players under the names Xatuzjc and BikeyBoyGang started work on building an apartment complex underneath the lake in the center of town without the rest of the town's knowledge. One of the people who were with them, named DuckOfficial, was infamous for creating infighting between the new group, specifically over a sheep named "cumc loth". This irritated Kit further, as he would have to break up the fights that tended to occur in front of his house. DuckOfficial eventually got banned from the server on October 15th 2019 by Foxen for sending anti-Semitic messages in the chat, and their base that they attempted to build on the outskirts of Ikaport became public property. Hours within Duck's base becoming public, Kit would arrive there and proceed to burn all of Duck's belongings out of catharsis, killing cumc loth and Duck's skeleton horse in the process. Not long after this, Kit would move to Sexton alongside Ven0mous, not to return to Ikaport unless he needed sand.

On Christmas Day 2019, many players joined the server to find that spawn, the Nether hub, and multiple surrounding areas, had caught fire. It was revealed that overnight, Xatuzjc had burned multiple areas around the server with an unclear motive. They immediately received permanent bans from the Minecraft server, Simple's Discord server, Simple's Twitch chat, and were banned from commenting on Simple's main and full-stream channels, both for the sheer amount of destruction and for prior annoyances relating to the server. Most importantly, this attracted the eye of KitLemonfoot, who at the time was living in the now-abandoned Sexton. After moving a portion of his belongings back to Ikaport, Kit started work on evicting BikeyBoyGang from Ikaport as well, however this was stopped by Victuracor as Bikey had developed a large portion of the apartment complex.