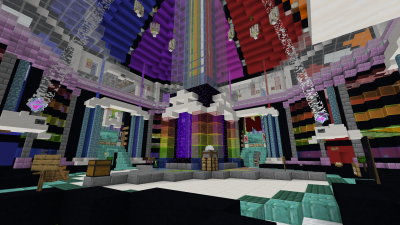 Central point of the Nether, has some shops and information about the server.

The Nether Hub rework started Oct 31, 2019 The Hub was designed in creative, with input from the community on things such as: type of theme, style of lettering for the NESW directions. Specific things like block choice and the dome were split between the group of them. GimoTheBeast, bl1ngbl0ng, NkdSquid24, RussEfarmer, Arceveti and Hole Gang gifted tons of resources. Gimo made a server for everyone to test out building prototypes. NkdSquid did large portion of the initial base structure, Gimo and bl1ngbl0ng designed the rest of the build (side rooms, 2nd floor). Noll_Reed did a lot of information gathering by making polls for everyone to give their opinions without screaming at each other, since that was a big issue. There were a lot of volunteer builders in the early stage of the build process. Arceveti added in the nicer boat aligners so they weren't blocking the path anymore. then matthew2837 and snakesphere added the unbreakable end crystals.